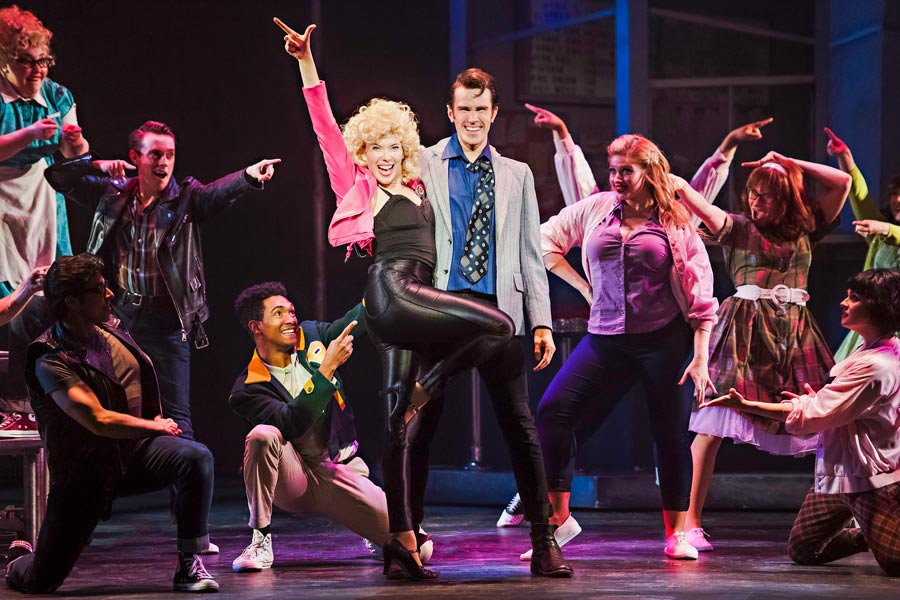 CAMBRIDGE – A-wop-bop-a-loo-bop, a-wop-bam-boom. Throw on your leather jacket, tease your hair, rev your engine, and get ready to hand jive as one of the most popular musicals of all time explodes onto the stage at the Hamilton Family Theatre Cambridge.

Grease, the hit Broadway phenomenon that inspired one of the most successful movie musicals in history, runs for four weeks until  Aug. 3 in Cambridge.

With the production already over 90 per cent sold out, audiences are encouraged to buy tickets as soon as possible.

Grease will also run for four weeks at the Huron Country Playhouse in Grand Bend from Aug. 8 to 31.

Grease tells the memorable story of worlds colliding in the name of love, with a handful of high school drama thrown in.

It’s 1959 and the slick T-Birds and sassy Pink Ladies are about to enter their senior year at Rydell High. Over the summer, popular tough guy Danny Zuko has a secret romance with innocent new girl Sandy Dumbrowski.

They had a blast, but now that they are back to school and confronted with cliques and peer pressure, will their summer dreams be ripped at the seams?

Featuring unforgettable characters and mega-hit songs like Summer Nights, Greased Lightnin’, Beauty School Dropout, We Go Together, and many more, Grease is an “electrifyin’” musical extravaganza that is sure to make audiences stand up and cheer.

“It’s energetic, fun, and packed with great tunes that appeal to all generations of theatregoers – we are excited to present it for the first time in Drayton Entertainment’s history.”

The cast assembled for this ‘summer lovin’ musical includes David Cotton as Danny Zuko, the confident and conflicted leader of the T-Birds.

Drayton Entertainment audiences will remember Cotton as Tony in West Side Story and Link Larkin in Hairspray last season, as well as Marius in the 2014 hit production of Les Misérables, among other roles.

Chelsea Preston takes on the role of sweet and shy new-girl Sandy, who doesn’t quite fit in with the popular Pink Ladies. Preston previously appeared as Amber in Hairspray and Cinderella in Cinderella: The Panto for Drayton Entertainment.

With a book, music and lyrics by Jim Jacobs and Warren Casey, Grease originated in Chicago at the Kingston Mines Theater in 1971 before debuting on Broadway the following year.

The film version produced one of the best-selling soundtracks in history and is the highest-grossing movie musical of all time.

The two Travolta/Newton-John duets, You’re The One That I Want and Summer Nights were both number one hits and appear on the All-Time Best-Selling Singles list.

The song Hopelessly Devoted to You was nominated for an Academy Award in 1979 for Best Original Song, and the film’s title song, Grease was a number one hit single for singer Frankie Valli.

Regular performance tickets are $48 for adults and $29 for youth under 20 years of age.  Tickets for select discount dates and groups of 20 or more are $39. HST is applicable to all ticket prices.

Grease is on stage until Aug. 3 at the Hamilton Family Theatre Cambridge.