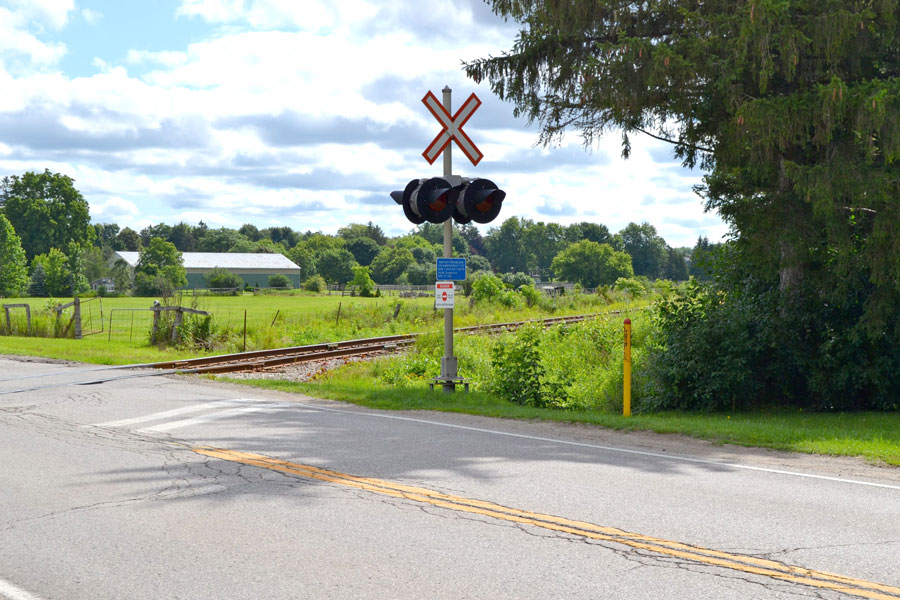 Guelph Junction Railway crosses Arkell Road at this crossing. Nearby neighbours are concerned about noise and traffic stoppages when the train switches cars. Advertiser file photo

ARKELL – While the Guelph Junction Railway has agreed to move its vacuum truck operations from the Arkell Siding to a plant in Guelph, some Puslinch residents continue to complain about trains blasting whistles through the night.

“We’re happy and thankful to Guelph City Council and Guelph Junction Railway (GJR) for the relocation of that vacuum housing and vacuum transloading siding,” said Bruce Taylor, a member of the Train Committee, a group of residents in Arkell who share concerns about the train.

Taylor spoke to Puslinch council in the summer about the noise from the vacuum transloading that was occurring at the siding on Arkell Road, hoping the township could do something about it.

He had other complaints too – that trains block roadways for more than the five minutes allowed by Transport Canada when switching cars, and that horns and whistles go off through the night, often waking people from their sleep.

Township staff brought these concerns to GJR and on Oct. 7 the railway sent a letter to Puslinch residents notifying them the issue with vacuum truck transloading has been resolved.

The letter states that while noise and vibration studies indicate both are within acceptable limits, “the results were close to the threshold at the nearest test location and [given] the concerns we heard from nearby residents, we made the decision to move our vacuum truck operations,” wrote GJR general manager Les Petroczi.

“We’re also looking into different equipment that will allow us to use the Arkell Siding for unloading again in the future with much less noise.”

Taylor said it’s a good first step, but it’s not enough. The noise also comes as the train crosses roadways and sounds its horn.

“All we want is the same as Guelph – a slow, safe and quiet train,” he said.

Taylor said Guelph has 30 crossings and trains do not sound their horns when they pass through the city. Yet in Puslinch, with eight crossings, the horns blast away, day and night.

“We have the model right next door. We don’t have to do anything unusual,” he said.

In a phone interview with Petroczi and administrative assistant Amber Bryer, Petroczi said Guelph passed a whistle cessation bylaw, which means the horns don’t sound and the city accepts liability if an accident is to occur.

How to do that is spelled out by Transport Canada.

“It has to be initiated by the township and can’t be by the railway company,” Bryer said. “Guelph has whistle cessation through the downtown core, but we can use the whistle if there’s a safety issue.”

In a council meeting in the fall, councillor Jessica Goyda told of an incident where she was about to cross the tracks and stopped when she heard the whistle blast.

“The whistles are an important safety feature,” she said at the time.

Mayor James Seeley has also said that with GJR altering its operations at the Arkell siding, he considers the matter resolved.

In terms of blocking the road while switching cars, that too is heavily regulated by Transport Canada and the limit is five minutes.

“If emergency vehicles need to cross, the train has to let them,” Petroczi said. “And there are times when the signals are going but the train is not in the crossing. We could be switching at Arkell for 15 minutes at a time.

“In that case, cars could be jammed up. But cars can make a judgement call and make the crossing.”

“Best practice is don’t cross when the signals are going. But in this case, a judgement call can be made,” she said.

Petroczi said GJR is working on installing a motion detector system, so the signals will stop when a train is off the road. That should relieve some of the stoppage, he said.

“This will have to go to Wellington County for approval though. We share the cost,” he said, adding he thinks the county is amenable.

“People are at home; many may have retired. Because they are home, they are more aware of our operations,” he said. “We don’t get a lot of complaints. Usually it’s just the same few.”

Business did slow down during the pandemic but it’s picking up again and getting back to usual, Petroczi said.

Transport Canada follows up with GJR when it receives complaints and GJR is following all regulations, best practices, and standards, the two said.

“As a municipally-owned railway, our focus is on establishing healthy relationships,” Bryer said.

“We want to make sure everyone is happy.”