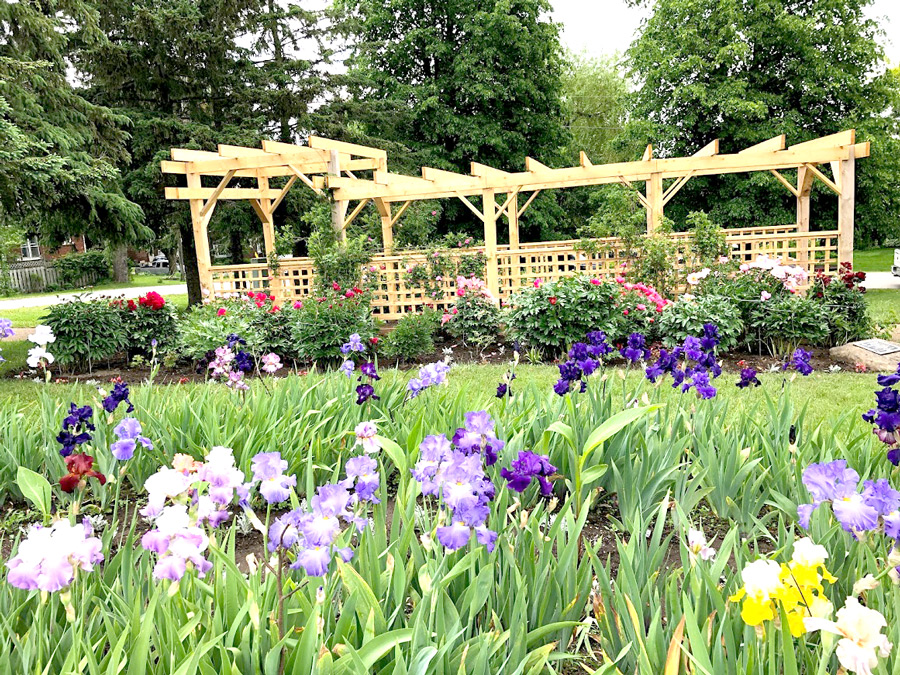 The pride of Fergus - Terry Fox Park boasts some gorgeous irises and peonies, that are both in bloom in June. But take a wander any time of year to appreciate the thought and careful planning that went into this public space. Submitted photo

The Wellington Advertiser has invited local horticultural societies to write about what they are up to and what’s going on in their gardens in this strange summer of COVID-19. For questions or to submit articles, email jshuttleworth@wellingtonadvertiser.com

FERGUS – There are monuments, schools, streets and parks all across this country commemorating Terry Fox, who in 1980 ran 5,373kms across the country, raising $23.4 million ($1 for every Canadian at that time) for a cure for cancer.

Fergus created the Terry Fox Park in the early 1980s on property that was the old golf course. It’s located at the corner of County Road 18 and Beatty Line.

It was Fox’ vision, inspiration, determination, toughness and hard work that spurred the Fergus and District Horticultural Society to create a park full of gardens truly representative of this historic moment in our history.

Terry Fox Park became the society’s Millennium project in 1999 and the group transformed the park in three phases over the next few years. The park transformation was planned, built and paid for by the society.

A bed of prize peonies came from A.P. Saunders, Wally Gilbert and Billy Brown, all famous hybridizers and growers from the area. There are 56 varieties and some are 100 years old. Fifty heritage peonies were donated by the Canadian Peony Society.

The bed next to the pergola was designated for irises, hundreds of species such as tall bearded, Japanese, old fashioned and Siberian. The irises and day lilies were donated by Don Blakely, George and Julie Kron and other members.

The rest of the gardens include roses, lilies, clematis and hostas. The roses on the pergola were actually a mistake but they look so magnificent and have been left to flourish.

Tables and benches were donated. A pear tree was planted by Don Matthews and a spruce tree in memory of George Cox, a member of the Society.

“A park like this takes a lot of planning,” said Roberta Vlietstra. “It also took us many years to generate enough money from our plant sales.”

“We take pride in the work we do here. The legend of Terry Fox is important to us,” said long-time society member Dean McKay. “It’s an honour to be part of the special team dedicated to care for these gardens.”

“The park holds a special place in the hearts of our membership. We are all dedicated to keeping this a very special place,” said Connie DiPisa, current President.

Ken Johnston has been a member of the Fergus and District Horticultural Society for four years and is a digger, a board member, and chair of the club’s media committee.