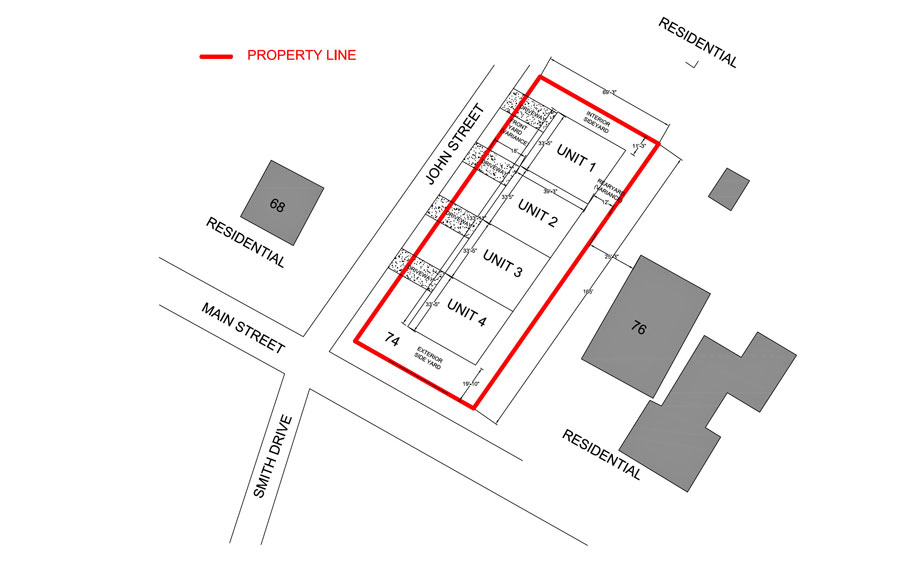 A four-unit townhouse development has been proposed for a .26-acre lot on Main Street in Drayton. Mapleton council agenda package image

DRAYTON – Despite concerns from neighbouring residents about a proposed four-plex development on Main Street in Drayton, Mapleton council members were generally supportive of the project at a May 10 public meeting.

The proposal would see a .26-acre property at 74 Main Street rezoned to Residential (R3) to allow a four-unit street townhouse development. To facilitate this proposal, the applicants are seeking relief from the minimum lot area, as well as minimum rear yard and front yard setbacks.

A report from Mapleton planner Linda Redmond states the proposal represents “a logical infill development” that will contribute to the housing needs of the community.

“The lands are appropriately located for this type of use and staff are satisfied that the proposal is consistent with the provincial policy statement, the growth plan and meets the criteria of the county official plan. This development represents good land use planning,” Redmond states in the report.

Although designated residential in the County of Wellington Official Plan, the property is currently zoned site-specific Institutional.

This site-specific exemption relates to a bus operation on the lands adjacent to the subject lands. “At one time this parcel was under the same ownership as the bus operation. However, it has since sold and stands separate from that property. As this parcel is vacant it is appropriate to rezone it to a zoning category that is more suitable for the area,” Redmond explains in the report.

The proposed development will be subject to site plan approval by the township. Site design, grading, servicing, stormwater management, buffering, landscaping, parking, fencing and other elements will be reviewed as part of the site plan review, the report notes.

Developer Tim Seifried said the units in the four-plex, which are currently planned as rentals, are aimed at “retired-type people that are looking to downsize and have a smaller footprint.”

While viewed as “affordable” housing, Seified noted “affordability is not cutting quality or corners or any of that stuff.”

While noting she and her husband David Howe support the change in zoning to residential and the use of the vacant land for infill housing, local resident Anne-Marie Hagen did express some concerns about the development.

“For example, we’d certainly hope that unit four, which is the closest one to the corner, has some kind of architectural elements such as a veranda or bay window, so it’s not like a blank brick wall facing Main Street,” she stated.

“We’re wondering if allowing lots that small sets some concerning precedents,” Hagen added. “For example, a lot that now has one home on it suddenly being subdivided into a number of small lots.”

Another resident, David Neyder,  in a written submission, said, “The proposed amendment to the Mapleton Zoning Bylaw is short sighted and benefits only the applicant.

“Home values have been increasing in this neighbourhood, which is good for the community and for the township. This amendment would reverse that trend,” he continued.

Neyder stated the granting of minor relief from minimum lot area and rear and front yard setbacks “would allow the developers to construct city-style townhouses on Main Street in Drayton, making it an eyesore for everyone traveling through the village.

“This community doesn’t want new housing that sticks out like a sore thumb, especially when it will cram four families into a single lot. In brief, this is a bad plan for the practical and social reality of our community,” Nayder stated.

Redmond pointed out the requested reductions to minimum lot area and front and rear setbacks are relatively minor in nature, calling for a reduction in front yard setback of just 1.8 feet and in the rear from 24.9 to 12 feet.

“So overall, they almost meet the minimum lot area requirement,” she explained.

Redmond also pointed out the lot frontage, at more than 10 metres, exceeds the minimum requirement of 6.5 metres.

“And why that’s important is, because they have quite a bit of frontage, it provides an opportunity for on-street parking, whereas the 6.5-metre frontage limits what kind of on-street parking would be available in that area. So that’s a good thing,” she stated.

“It’s also providing affordable housing and an alternative housing type within Drayton, which we don’t see a lot of,” Redmond noted.

Redmond also indicated approval of the development would not be precedent-setting in terms of lot size.

“We review each application on its own merits, and the decisions are based on the application before council. So, it doesn’t set a precedent,” she stated.

“I just think this is a great idea,” said councillor Marlene Ottens.

“I was initially a little concerned about the lack of a rear yard. But then, it occurs to me that not everybody wants a big house and a big yard. And this is fitting the, I guess what they’re calling the missing middle of housing … affordable housing for the people in the middle, the young families, the newly retired people. They’re not looking for seniors’ housing, they’re not looking for starter apartments, they want this sort of middle-of-the-road housing and we don’t have a lot of that in our community and I think this is a perfect fit for that lot and I’m happy to see a development like this coming in here,” Ottens added.

Councillor Paul Douglas asked what type of material would be used in building construction.

“Our scope would be to build something fitting for the neighbourhood … maybe some brick or stone, a durable building basically,” replied Seifried.

“As we’re all aware, or shortly will be with all the ads for the provincial election, affordable housing is a big issue. It’s slightly more than likely going to be a big issue in the municipal elections this fall, too. And this seems to me like a good way to have some affordable housing … for people like myself that are retiring and looking for a little cheaper place to live than a seven- or eight-hundred-thousand-dollar house and not ready for senior buildings yet,” he added.

While not a fan of intensification directives, councillor Michael Martin said he supports this development.

“I think people move to Drayton and small towns for specific reasons and intensification is not one of them,” he stated.

“However, this particular lot makes a lot of sense to me. You know, the current zoning on it is archaic, probably ridiculous, really, if we think about it. So the proposed development seems to make a lot of sense,” he added.

Council approved a motion to accept the planning report on the proposal for information.