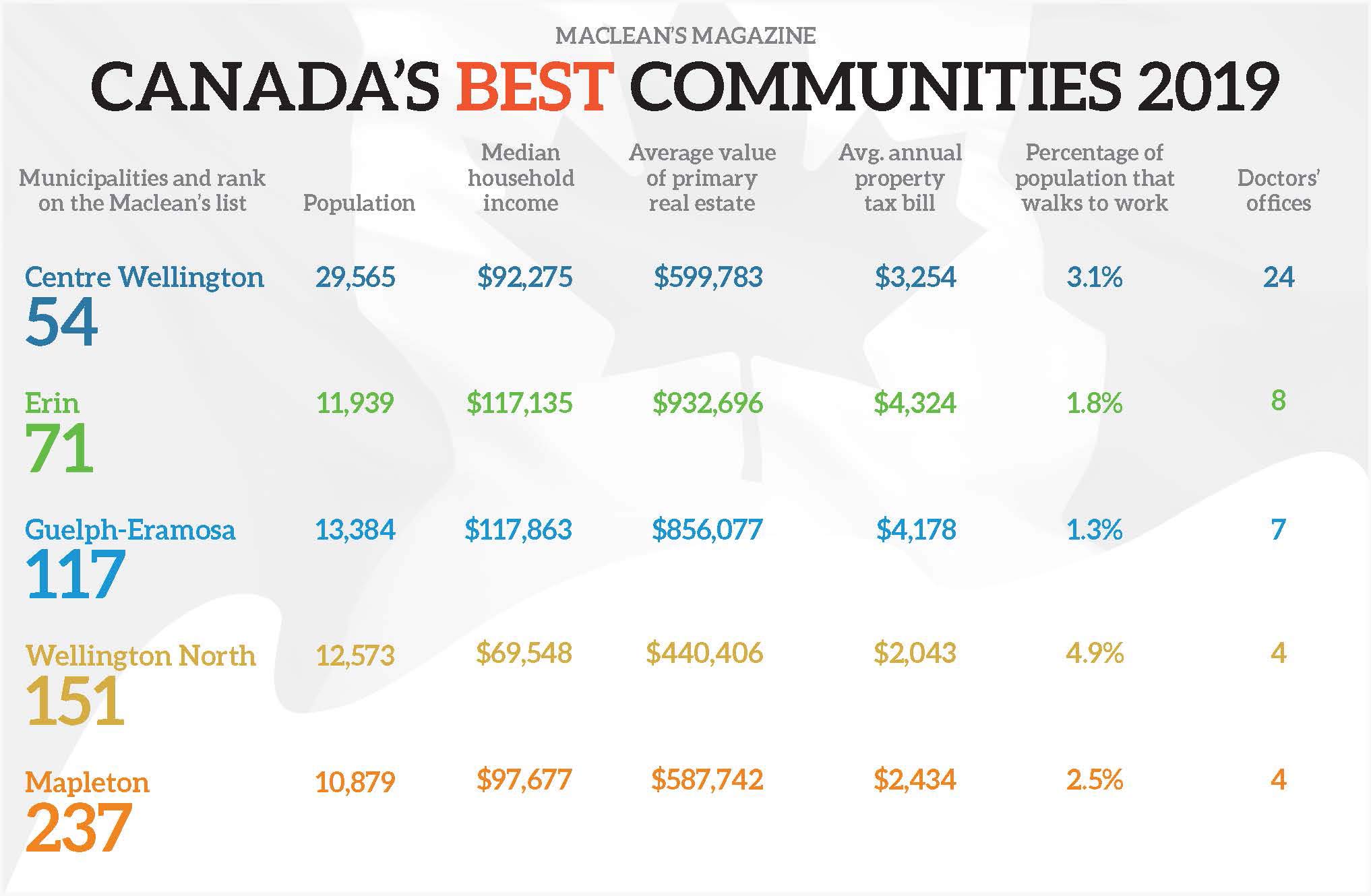 Data samples - Five out of seven municipalities in Wellington County appear on the 2019 Maclean’s Magazine listing of the 415 “best” communities in Canada. The ranking is based on a detailed system of points, available at macleans.ca. Above is a small sampling of some of the data released with the listing.
Wellington Advertiser illustration

WELLINGTON COUNTY – Five local communities are on the Maclean’s Magazine 2019 listing of the best places in Canada to live.

The listing takes many factors into account, ranging from household income and property taxes to weather and crime severity.

Centre Wellington was number 54 on the list of 415 Canadian municipalities.

First place went to Burlington, followed by Grimsby, Ottawa, Oakville and New Tecumseth. Salmon Arm, B.C. was the only non-Ontario place to crack the top ten, at number seven.

Among Wellington’s neighbours, the City of Guelph was 47, Orangeville 98 and Caledon 164. Milton was 17 and Toronto 19.

A complete description and the full listing are available at macleans.ca.

There is also a sub-listing of the best communities in which to raise a family, with Oakville number three and Milton number five.

“We make categories we think are most important to average people worth the most points,” said Maclean’s writer Claire Brownell.

“Different things are important to different people, of course, and we invite you to adjust our category weightings to your taste and find the city that’s perfect for you using our build-your-own-ranking tool.”

With each municipal name on the list is a link to brief highlights of statistics that contributed to the ranking.

Among the listed Wellington municipalities, all had a 5% per unemployment rate and a Statistics Canada crime severity index five-year average of 26. (Toronto’s was 58.)

The average annual property tax bill was $3,254 in Centre Wellington, representing 2.5% of the average income.

The average rent for a two bedroom apartment was similar, ranging from $1,047 in Centre Wellington to $1,196 in Erin.

The percentage of people able to walk to work was generally low, ranging from 1.3% in Guelph-Eramosa to 4.9% in Wellington North.

Communities got points for the percentage of population employed in arts, culture and recreation: Centre Wellington had 2.2%, Erin 1.9%, Guelph-Eramosa 2.6%, Wellington North 0.7% and Mapleton 1.1%.