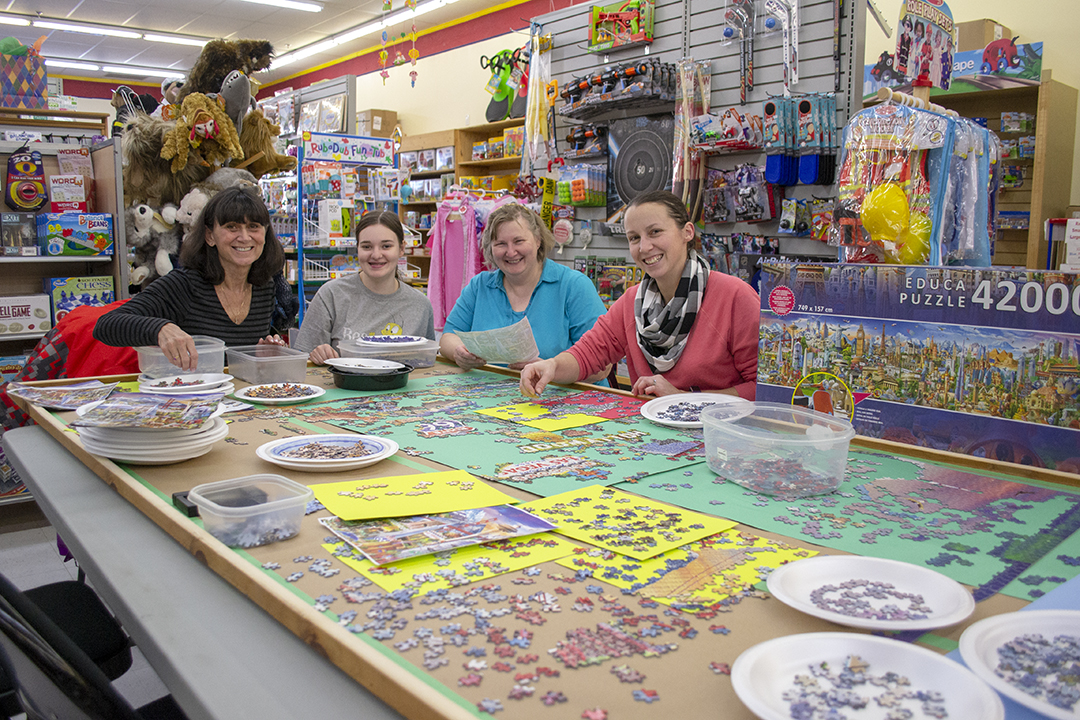 Puzzle competition - Jester’s Fun Factory in Fergus, which has held several puzzle-related promotions in recent years, is hosting what officials are calling one of the largest jigsaw competitions in Canada at the Fergus Legion on Oct. 20. ABOVE: Working on a 24-foot, 42,000-piece puzzle at Jester’s in January were, from left, Sharon Brioux of Orton, Jennifer and Michelle Coyle of Kitchener, and Kim Walker of Fergus.
Advertiser file photo

FERGUS – About 180 puzzlers are set to participate in what officials are calling one of the largest jigsaw puzzle competitions in Canada.

Hosted by Jester’s Fun Factory at the Fergus Legion on Oct. 20, the event is expected to draw about 60 teams of three, which will compete to be the fastest to assemble a 500-piece puzzle.

The competition was originally announced in May by organizer Evelyn Gould, co-owner of Jester’s Fun Factory, a toy and game store in Fergus.

“I wasn’t even sure we would get [the teams] all filled, but when I told people about it,  their eyes just lit up,” said Gould, noting all spots were filled by July.

“Their instant excitement seemed to be contagious as they quickly told friends and family about the competition.”

Gould said she has recently noticed an increase in the popularity of jigsaw puzzles.

“I have had a few customers tell me it was doctor recommended for stress relief. They found it very relaxing and enjoyable and ended up getting hooked on the hobby,” said Gould.

The Fergus competition, co-sponsored by Ravensburger and Cobble Hill brand puzzles, will feature teams composed of family members, friends and even complete strangers. Some participants are coming from more than an hour away, said Gould.

Rules for the Oct. 20 event will be reviewed at 1:15pm and the competition will start immediately following. For the first 30 minutes participants will not be allowed to view the picture of their puzzle.

A first place winner is expected to be declared within 90 minutes. There will be first and second place team prizes for each brand of puzzle in the competition.