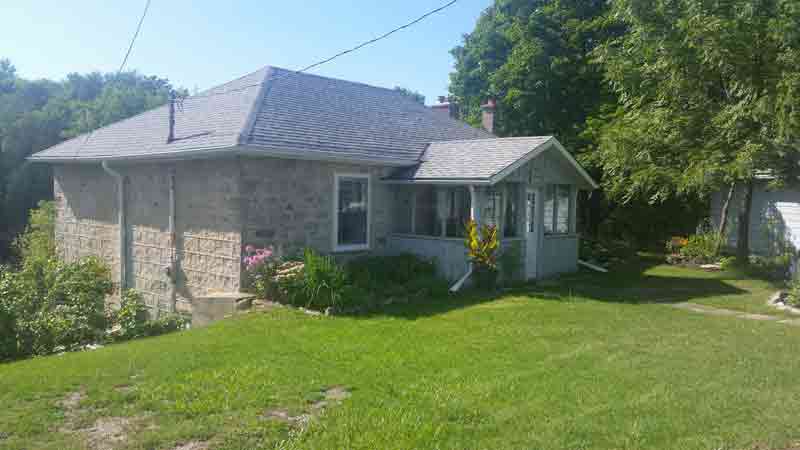 Historic home - Craighead, the historic cottage on Union Street in Fergus, is another garden the Fergus and District Horticultural Society maintains. Submitted photo

Since they can’t open their gardens to the public this year, the Advertiser has invited local horticultural societies to write about what’s going on in their gardens. For questions or to submit articles, email jshuttleworth@wellingtonadvertiser.com.

Craighead is a beautiful, old stone home that sits on the bank of the Grand River on South River Road in Fergus.

It dates back to 1842 and is one of the earliest surviving stone houses in Centre Wellington.  It has been designated by Heritage Centre Wellington as a limestone farmhouse in the Georgian Style circa 1842 built for early pioneers, Hugh and Elizabeth Black and their large family.

It stands relatively unchanged from the time it was constructed.

From lack of attention and care, the gardens had become indiscernible and overgrown over the years.

This property at 495 Union Street is an important part of our history.

Senator Robert Black, a great-great-great grandson of Hugh Black, highlights this on the plaque in front of the home. This was lifted from Pat Mestern’s book Looking Back, The Story of Fergus through the years 1833 – 1983, Volume II and printed with his permission:

“In 1834 Hugh Black sold his place in Scotland and moved with his wife and family to the wilderness of Canada. While in Scotland Hugh Black had been a farmer, but when he came to Fergus he realized the need for a tavern keeper.

“With the help of other settlers, he built the first hotel in Fergus … The hotel was owned and operated by Mr. Black for many years. It became the social centre for the town.

“Mr. Black was an avid curler and initiated the Fergus Curling Club, becoming the first president in 1834.”

He is also credited with starting the first stage coach between Fergus, Puslinch, Dundas and Hamilton.

Hugh Black eventually sold the hotel and moved to the south side of the Grand River to take up farming. The stone house he built was called Craighead after his home in Scotland.

Originally there was a wooden foot bridge which joined the north side of the river to the home’s back yard.

The Blacks and their 13 children lived here until his death in 1855. Fergus has been the home of seven generations of the Black family.

The home was designated to be of heritage significance in 2017.

The Fergus and District Horticultural Society is honoured to be part of the initiative to retain and maintain the beauty of this property.

– Ken Johnston has been a member of the Fergus and District Horticultural Society for four years and is a board member and chair of the publicity committee.