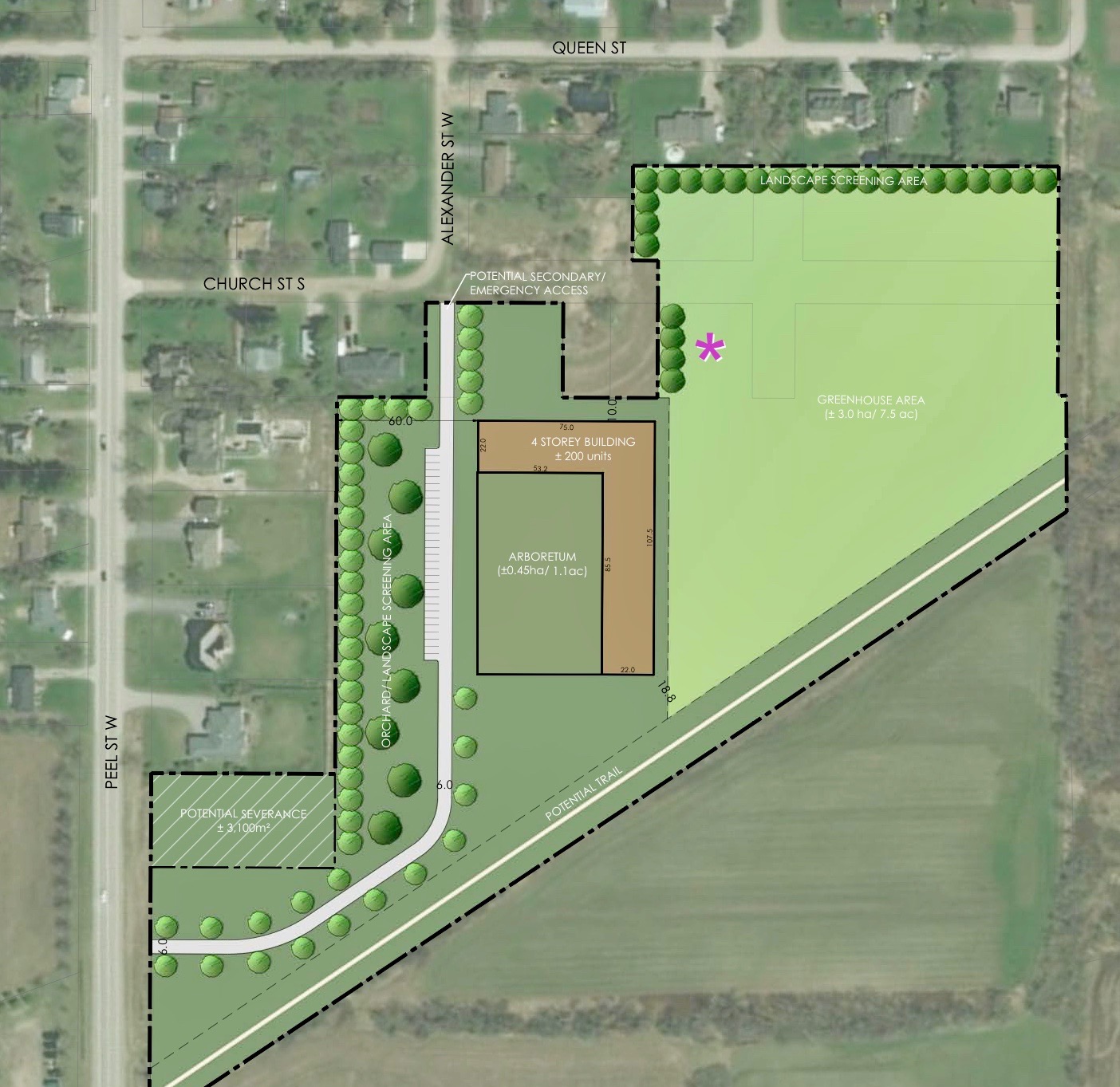 Desired Living is proposing a 250-unit retirement complex in Alma that could also include a greenhouse operation. (Mapleton Township agenda image)

ALMA – A developer proposing a four-storey, 250-unit retirement complex here has invited Mapleton Township to be a partner in the venture, which could also include a greenhouse operation.

Developer Stuart Roxburgh, CEO of Desired Living, is proposing the develop at 31 Church Street at the southern edge of the village.

Proposed greenhouses on the site would provide products to the retirement complex and for commercial sale. An arboretum is also part of the preliminary design.

Roxburgh and Andrea Sinclair of MHBC Planning presented details of the proposal to Mapleton Township council at a videoconference meeting on April 28.

Sinclair explained the proposal is “very conceptual at this point.

“We come to you very early in the process,” said Sinclair, noting the proponents “have not filed any formal applications” but have had preliminary discussions with township and County of Wellington staff.

Sinclair told council the proponents are seeking, “your direction and general support.”

“The concept behind this development is really for green energy, as well as a place where those who have grown up in rural communities can retire that “doesn’t have kind of an urban feel.

“It’s a very unique concept,” said Sinclair, noting that amendments to the County of Wellington Official Plan would be required if the development is to proceed.

While developments of this nature are “obviously not contemplated in Alma” under the current planning approach, with “just under 19 acres, we feel there is enough land to do this,” said Sinclair.

A consultant’s report from Design+ presented at the meeting notes that under the Alma’s “hamlet” designation, uses including commercial, small scale industrial and institutional may be permitted “where compatible and where adequate levels of service can be provided.”

Engineering consultant Ron Antuma explained the developers are proposing to use a state-of-the-art membrane bio-reactor (MBR) system – “technology used in space shuttles” – to process wastewater from the development.

“This is probably one of the best treatment systems,” Antuma noted.

Mayor Gregg Davidson pointed out MBR systems are approved for use in southwestern Ontario, although “they’re more prevalent in the Toronto area.”

Noting there are some residential wells around the site of the proposed development, councillor Paul Douglas asked if a hydrogeological study would be completed.

“It’s probably a requirement once we submit for a test well,” said Roxburgh. “We certainly don’t want to do a draw-down on those wells.”

“It looks like a great development. Any idea how many jobs might be brought to Alma as a result?” asked Douglas.

Roxburgh estimated 60 to 80 jobs could be created, including greenhouse and arboretum staff, as well as PSWs, food preparation, wait staff, grounds workers and others employed at the retirement complex.

He noted that number would be based on the complex going forward with the full 250-unit residence.

“If we drop to 150 then there a reduction in staff right from the get go,” Roxburgh explained.

Sinclair said the proponents have already had discussions with county staff and addressed some concerns.

The “initial concern was issues with provincial conformity,” she explained, noting the developers had reached out to provincial staff for initial feedback.

“The province does not think there would be an issue,” Sinclair said.

However, she added, “They would have to review any detailed applications that have to come in.”

“Obviously the county wants to see all of the studies” as well, Sinclair added.

“Everyone is willing to look at this and recognizes it is very unique, but has a lot of merit,” she continued. “Given the county is updating their official plan at the same time, it’s a really good time for something like this to be considered.”

Davidson suggested that under planning policies for small hamlets, “large developments like this are usually not allowed.”

“It’s typically not defined, generally, because the services haven’t been there. But if it’s demonstrated that the services could happen in another way…” she replied.

Roxburgh noted the county’s economic development staff questioned, “whether on not the population (level) would be able to support this.

“Taking a look at everything that’s going through, there is a demand for this,” he said.

He also noted a report from the local Seniors Centre for Excellence “indicates this would be a good fit for the township.”

Davidson noted the county itself is considering a Continuum of Care retirement living project in Aboyne at a cost estimated at more than $80 million – “so we recognize the need.”

Roxburgh explained the developers are offering the township “a 15 per cent stake as a partnership, so the Township of Mapleton actually gets revenue from this complex as well.”

Under the terms proposed by Roxburgh, the township would be a partner in “all facets – housing, greenhouse, waste management, land and sewage,” in return for a 15% stake of net revenues.”

The township’s role would include:

Also, Roxburgh told council, “any interest-free money that would be able to be given at this point would be appreciated.”

However, he added “if not, that’s okay,” as the developers would also be approaching other levels of government and pursuing other sources of funding.

Roxburgh said at this point the proposal is extremely flexible.

“Agriculture is very close to my heart,” said the developer, adding he is getting tired of “watching neighbours move to the city” due to a lack of suitable housing.

“What I’m looking at is keeping the community together and a partnership with you. How that’s all going to play out is amendable and can be discussed.”

Council approved a resolution to accept the delegation’s presentation for information and directed staff to continue assisting the developer with the process.