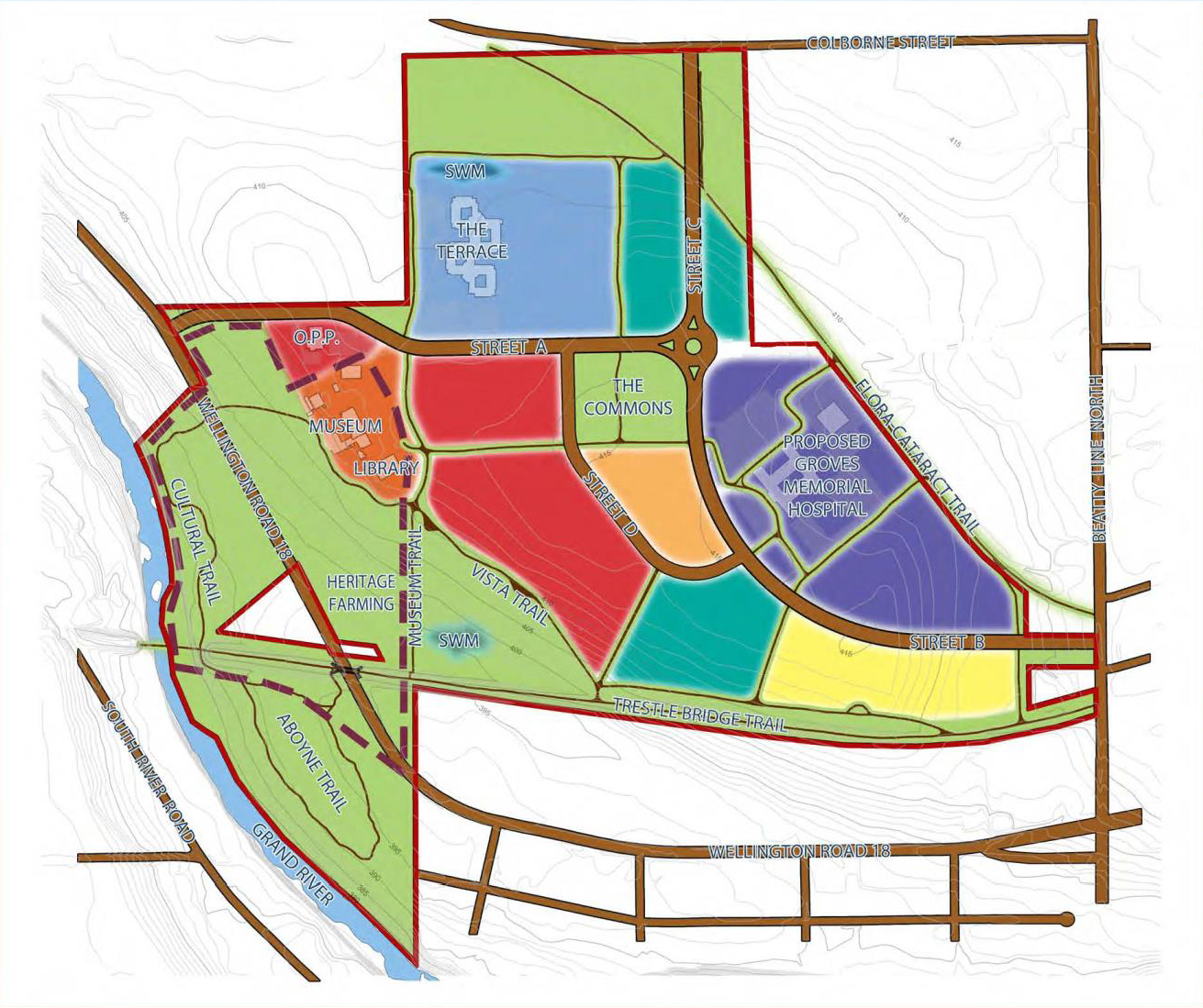 If approved, the proposed $88-million Continuum of Care seniors’ community development would be located at the Wellington Place complex on lands shown to the east of the Wellington Terrace Long-Term Care home in this 2011 illustration by VG Architects.

WELLINGTON COUNTY – Work on the proposed Continuum of Care and other major county projects, put on hold due to COVID-19 pandemic, is set to resume.

A report from CAO Scott Wilson during the June 25 county council meeting notes that after Premier Doug Ford declared a provincial state of emergency on March 17, several projects the county was working on were set aside.

“Staff efforts were better spent attempting to respond to the demands placed on our operations, rather than pursuing new ambulance stations, roads garages or the Continuum of Care,” explained Wilson.

Now that county officials “have better understanding of how to deal with the reality of COVID-19,” Wilson said health and safety measures have been put in place that will enable staff and councillors to proceed with “other than day-to-day” projects.

The county’s Continuum of Care design committee, made up of county councillors, staff from several departments, and the architects (Salter Pilon), last met on Feb. 24.

Development of the architect’s presentation to county council was originally scheduled for May 28.

Delayed costing work on the project is now expected to continue in June and “discussions with the architect will focus on options to make the project financially viable,” the report states.

The design committee will convene in early to mid-July to consider changes to the overall project needed to match finances.

Presentations by the architect – including a final construction cost estimate – to the information, heritage and seniors’ committee, and then county council, are now expected to be made in October.

The report points out the province announced on May 19 that a commission would be appointed to review the long-term care system with work to begin in September.

On May 27, in response to reports of negligent care in some homes, the province moved the commencement date for the commission to July.

“While the allegations that prompted the establishment of the commission do not directly relate to the physical structure of a long-term care home, it is possible that the commission’s observations may alter the assumptions which underlie the design of the Continuum of Care,” Wilson explains in the report.

If the Continuum of Care project moves forward, the report notes, “the county should be in an excellent position to take advantage of (expected) recovery-focussed infrastructure programs offered by the provincial and/or federal governments.”

The term “shovel ready” has become a prerequisite for funding approvals in the last 10 years, the report states, adding, “it is likely to remain the case as both senior levels of government look to re-start and boost the economy.

“Having a project that can be pulled off the shelf and implemented in short order increases the chances of grant success.”

The report was received for information by county council.

There was little comment on the report, aside from several councillors stating they look forward to receiving further information on the project.

Preliminary estimates have placed the potential cost of the Continuum of Care seniors’ community development, which would be located at the Wellington Place complex next to the Wellington Terrace Long-Term Care home, at around $88 million.

Once in operation, officials expect the facility to operate at a profit and to be revenue-neutral over the long term.