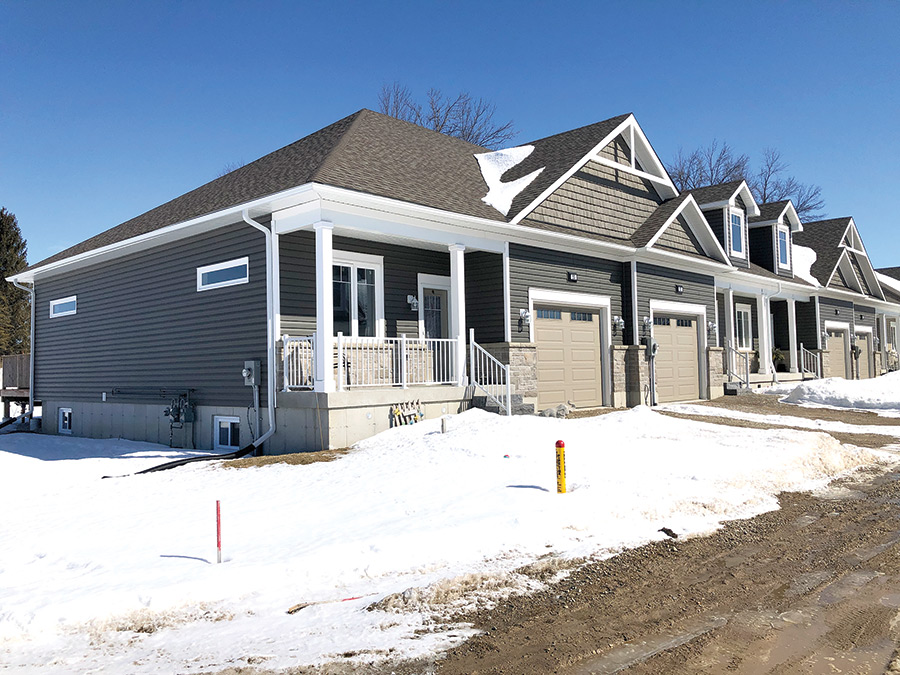 KITCHENER – Justice Catrina D. Braid reserved judgement after hearing concluding arguments on April 1 in a dispute between Harriston residents Rolf and Kerri Schuettel and the Town of Minto and its chief building official Terry Kuipers.

Kenilworth-based Quality Developments is also a party to the case with intervenor status.

The definition of a “storey” as contained in a Minto zoning bylaw was central to arguments at an Ontario Superior Court of Justice hearing from a virtual courtroom here on March 12 and April 1.

The Schuettels appealed the move to the Ontario Municipal Board over a variety of concerns ranging from public notice issues and parking, to storm water management impacts on neighbouring properties.

However, the parties came to an agreement before the matter reached the hearing stage.

However, as development proceeded on the site, which had changed hands from local developers Jeremy and Jeff Metzger to Kenilworth-based Quality Homes, the Schuettels questioned whether the agreement was being adhered to and eventually filed the case currently before the court.

On April 1, lawyer Kevin Thompson, representing Quality Developments, pointed out that what appear to be second floor windows in some of the disputed units are actually “faux dormers” and “not real windows.”

Regardless of how the court rules, said Thompson, “the external appearance of the building does not change.”

Thompson told the court “Really what we’re dealing with is living space within the attic.”

Thompson explained that if the court were to rule in favour of the applicant, design of two townhouse blocks on the property would be altered to meet the requirements of binding agreements of purchase and sale already in place for the units, including those with two upper floor bedrooms.

“Quality’s plan would be to put two bedrooms on the main floor and a third in the basement … So the density does not change,” said Thomson.

Presentations at the March 12 hearing indicated the one-storey restriction was included in the OMB minutes of settlement in an effort to limit the density to that typically found in developments aimed at senior citizens.

At the earlier hearing, Minto lawyer Michael van Bodegom said the restriction made the case “fundamentally about NIMBY – not in my backyard.”

Thompson said any remedy ordered by the court would do little to alter the character of the development.

“We’re really arguing about semantics to a degree.”

Thompson also argued the applicants did not file a building code appeal within the mandatory 20-day period after permits were filed, and the deficiency was not addressed in evidence presented at the previous hearing.

“There is no explanation, let alone justification for the delay, and so in the absence of this, this court has no jurisdiction” to issue an order affecting the permits, he stated.

“Imagine the chill in the construction industry if someone can lay in the weeds, not appeal a permit within 20 days and then, when construction is underway and binding agreements of purchase and sale have been signed, emerge and file a Rule 14 application and expect a declaration on zoning compliance,” said Thompson.

“It’s not something that’s contemplated. The legislation has a very specific 20-day period for that purpose.”

Thompson also argued that since the town zoning bylaw in question does not specifically define “mezzanine” there’s nothing to prevent the characterization of the upstairs “lofts” in that way.

“In the absence of a definition of mezzanine, there’s no requirement that a mezzanine be open to the floor before it,” he said.

Lawyer Steven O’Melia, representing the Schuettels, stated the case has always been about getting the Town of Minto to comply with the terms of the OMB minutes of settlement.

“The town is the author of that settlement just as much as my clients are,” he noted.

“For the town and its lawyer to now attack that settlement and say it’s NIMBYism is a strange position to be in.”

O’Melia also stressed his clients are asking only for a court declaration acknowledging the violations of the agreement and adjustments to the design of units not yet built.

“This was never about knocking down buildings,” he told the court.

He also said his clients contacted the town with their concerns promptly after learning of the construction plans.

“My clients acted immediately,” said O’Melia. “They approached council and said ‘This does not look right.’

“They didn’t lay in the weeds. They came forward with their concerns in a very early stage and then those concerns were ignored.”

O’Melia also pointed out construction continued on the development, even after the March 12 hearing.

On one of the blocks, where there was previously only a foundation, “now the shell of the building is effectively up … I don’t think that’s proper,” he stated.

O’Melia also pointed out van Bodegom previously argued that a storey can also be a mezzanine.

However during cross examination for an affidavit filed in the case, Kuipers was asked if he agreed that the structure has to be one or the other.

O’Melia said that response indicates “the town’s major argument that somehow they can be both is simply not correct and is not founded in the evidence.”

O’Melia also said van Bodegom’s assertion “that my clients are somehow NIMBYs” by virtue of seeking to limit the density of the development through the one-storey limitation is inaccurate.

“It was town’s suggestion that this was the way to get it done,” he pointed out.

Following presentations from the lawyers, Justice Braid indicated she was not prepared to issue an immediate decision. She did not specify a date for the decision.

“I will reserve and I will l release it as soon as I can,” she stated, adding the decision would be released to the parties involved via email.

O’Melia asked if an order prohibiting further construction activity pending the decision could be issued.

However, Justice Braid responded, “I’m not comfortable making any directions at this point.

“I need to work my way through the material and make a decision that’s comprehensive.”