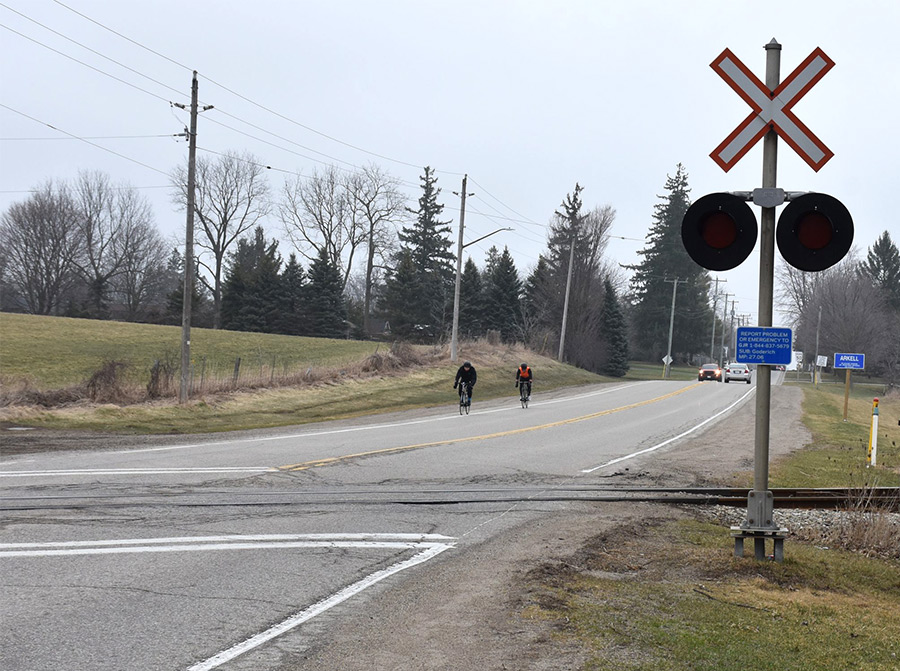 PUSLINCH – Over the past year, many Puslinch residents have grown frustrated with how the Guelph Junction Railway (GJR) has been operating in their community.

Specifically, they’ve become frustrated with changes to the train’s hours of operation and the use of horns late at night.

The Concerned Citizens of Puslinch formed a train committee consisting of five members; over 35 families in the area have also joined the cause to address their concerns.

– whistling of the trains;

– the train’s hours of operation;

– the cargo being shipped on the trains;

– whether Puslinch Township could be held liable in lawsuits involving the GJR; and

– a request for removal of railway ties.

However, recently these residents have focused on the train’s hours of operation, and its use of “horn blasting,” particularly at late hours of the night.

The train uses its much quieter engine bell at crossings within the City of Guelph, while it uses a much louder horn while crossing through Puslinch during late hours.

The City of Guelph has enacted bylaws that prohibit whistle blowing within the city, meaning the trains slow down at train crossings to a much slower speed while in Guelph, allowing them to use the quieter engine bell. Without a similar agreement in Puslinch, the trains still use their horn and don’t slow down nearly as much as they do while passing through Guelph.

Many Puslinch residents say it would be safer and more comfortable for everyone if the train would cross through Puslinch at a slower speed and without blasting its horn.

No final decisions have been made yet as the township, GJR and the city continue their discussions.

In a report to council, GJR answered some of the township’s questions.

The railway will be conducting a sounding vibration study and using alternate methods to unload.

Township staff’s report says the railway has indicated that the following steps have been taken regarding the concerns the township raised:

– installation of motion sensors at the Arkell Road crossing;

– working with PDI Bulk Guelph to resolve humming noise by the end of June;

council has not been particularly satisfied with the progress made so far, as some of the key points the train committee have raised do not seem to have been addressed to their liking.

Puslinch CAO Glenn Schwendinger said talks between the township and the railway have “definitely been a work in progress,” but believes meetings have been productive to this point.

Additional meetings are scheduled in the near future.

Council received the update for information and township staff have been directed to report back to council upon receipt of further information provided by GJR.

Councillor John Sepulis said he would like GJR to provide receptors at strategic locations where the noise is heard.

“[With regard to] the loud humming noise from the operations, I’d like to ask that they provide receptors at the locations where the noise is heard,” Sepulis said.

“I think they should have receptors located at strategic locations in residential areas.”

He also suggested the railway siding be relocated to Guelph.

“The CAO in his last paragraph infers that perhaps the siding should be relocated to the city. I was wondering if that could be pursued more vigorously with the Guelph Junction Railway.”

Sepulis agreed with Bruce Taylor, a member of the train committee, who would like to see the trains travel slower, similar to how they now do in Guelph, allowing the trains to use bells instead of horns.

“Mr. Taylor has done an exhaustive study on the fact that they use bells in the city, as opposed to a horn, and he seems to tie it to the slower speed operation,” Sepulis said.

“I’m wondering if that can be investigated as well,” he continued.

“In other words, look at slowing the speeds to permit “bells only” at the crossings in Puslinch.”

Councillor Jessica Goyda said there have been changes in the past year with regard to the train’s siding and railway without any consideration from residents surrounding the railway.

“It’s happened seemingly without any consideration for the residents surrounding it,” Goyda said.

Goyda highlighted two of the railway’s points in their response to the township: when the railway said they’ve been operating at the Arkell transloading location since the early 1900s, and a claim of not breaking any Puslinch sound bylaws in their operations.

Goyda expressed frustration with the remarks.

“I am extremely disappointed with both of these remarks, because while both may be true, I have lived in Arkell for over 30 years and I have never experienced the humming and the transloading or the train horns past 11pm, with the exception of this past year,” she said.

“There’s been a change in use, and although that may not be in any laws, it is immensely inconsiderate to knowingly impose this in a residential area in another community.”

Goyda was appreciative, however, that the city and the GJR will be working collaboratively moving forward.

“I’m particularly glad to see that they’ve hired a contractor to complete the vibration and sound tests, and also that there have been adjustments to the start time of the evening shift to be two hours earlier.”

Goyda continued, “I understand that the City of Guelph has been very receptive to discussions so far and have provided indication that we can look forward to resolution on some of these items by the end of June — for that I am thankful.”

Goyda suggested it be recommended to the city that they provide a phone number residents can call anytime, day or night, to report issues as they are happening.

“I think it is difficult to comprehend the magnitude of this problem without having a proper record of when this noise is happening, either for the humming noise or for the train blowing its horn late at night.”