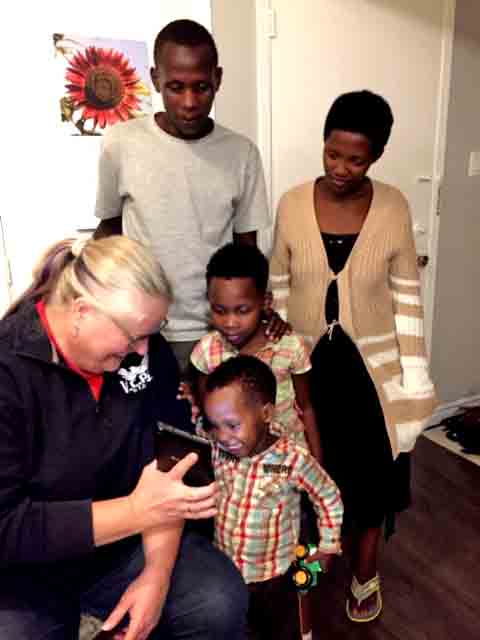 MOUNT FOREST –  Mount Forest United for Refugees aims  to make a difference, one family at a time.

Committee member Daphne Rappard said the Mount Forest United Church will host the Moore Family from Drayton for an evening of Christmas entertainment on Dec. 5.

The Moore family, known for its diverse musical talents, will be joined by country singer Cara Smith for an evening that promises to be full of joy and Christmas spirit, organizers state.

“Derek and Maggie Moore, along with their exceptionally talented sons Taylor and Drew and daughter Bria, will be sure to put everyone in the mood for the festive season,” organizers said.

Rappard added, “The United for Refugees committee is delighted the Moores and Cara have agreed to join us for this concert, where proceeds will go to benefit the newly arrived family from Rwanda.”

She noted, “Vincent and Antoinette, along with five-year-old Queen and three-year old King arrived in Mount Forest after a 26-hour journey from Kigali, Rwanda, via Uganda to Belgium to Toronto on Oct. 24.”

Their airfare, which was almost $6,000, will have to be repaid over time.

“The family, originally from the Democratic Republic of Congo, had been living in a refugee camp in Rwanda since 2007, with very limited access to all the things we are so familiar with,” Rappard said.

“Knowing absolutely no English, and never having been cold or having had to dress for it must be a totally bewildering experience and yet, three weeks after arrival, communication is coming along amazingly well, and the family is adapting. They are rarely wearing their winter coats and hats inside anymore.

“Queenie, who is in school, is learning rapidly about snow pants, snow angels and icicles. Vincent desperately wants to work, but is resigned to the fact that right now his job is to learn English.”

She added that the United for Refugees Committee was formed about five years ago by (mostly) members of Mount Forest United Church, feeling a need to do something concrete about the refugee crisis.

Through the United Church of Canada, a partnership was formed with the BVOR (blended visa office-referred) program where refugees identified by the United Nations Refugee Agency are matched with private sponsors in Canada. The government provides six months worth of financial support; the private sponsors contribute six months’ monetary support, as well as at least a year of social and emotional  support.

Rappard said, “it took almost a year and a half for us to make an application, raise funds and wait for our initial family to be chosen.”

The family was originally from Myanmar but had been in a refugee compound in Malaysia since before their six-year-old daughter was born.

“Fortunately they had learned some rudimentary English, which was extremely helpful. They arrived in Mount Forest in May 2016, and became independent sooner than the one year goal,” Rappard said.

“It was an incredible experience for all involved, and the family is thriving, eagerly preparing to become Canadian citizens.

“It was a heartwarming success story and one that made some of us want to do the same thing for another family.

“The only drawback was having to do all that fundraising again.”

Then Rappard read anarticle in the Wellington Advertiser that was the catalyst to the group’s musings becoming reality. The May 24, 2019 article titled More refugee sponsors needed outlined a Mennonite Central Committee (MCC) appeal for more sponsors.

“I cut it out and ignored it for over a month, then was horrified that we could miss this incredible opportunity,” Rappard said.

Though on a summer hiatus, the church council was approached to confirm the church would be financially responsible, the committee was re-established (with some changes), emails were flying to and from the Mennonite Central Committee and the cogs  of the wheel were turning much more rapidly than the first time around.

“By the end of July, I was sitting in my kayak on Healey Lake in cottage country, accessing wifi off a friend’s dock, when word came through that our application had been approved, and the next step was to choose a family from the profiles sent, that matched our criteria,” Rappard said.

“What a horrible task – to have to reject some of the families, in favour of one.”

Following more emails between committee members a family was agreed upon.

“By Aug. 19 we got official notification that our chosen family would arrive in four weeks to four months,” Rappard said.

“And so the frenzied activity began: getting donations for start-up costs, finding a suitable apartment (but not renting it too soon), preparing poster boards with itemized sticky notes detailing  household items and furniture that people could bring to a shower at the church, finding a translator to help us at the airport, finding volunteers to help with ESL (since the formal program in Listowel has a waiting list), learning some Kinyarwanda, finding a doctor etc. “

“And, just when we had everything in place, we were told the family would arrive at the end of October, just over three months from when we started the process! We also received notice of funding from the BVOR fund through the Jewish Foundation of Greater Toronto.”

Flora Burke of United for Refugees added the refugee family from Rwanda, Vincent, Antoinette, Queen and King,  are settling in well.

Burke notes “Although they didn’t speak a word of English when they arrived, they are determined to learn and are doing so quickly.  Their five year old daughter, Queen, has started school and is integrating nicely.”

Rappard said “it has been a whirlwind of activity, emotions and experiences. There is no Google Translate for Kinyarwanda. We rely on sign language (which apparently is not universal!), and the Oxford Picture Dictionary to help us explain things, or make grocery lists.”

However Rappard adds “a picture is not worth a 1,000 words if someone has never been exposed to the items in the picture before! So the concept of going to a bank, to open a bank account,  through a teller, who will give you a bank card, so you can go to a bank machine that spits out money (if you insert that card properly and push the right buttons) is absolutely preposterous, when you’ve never seen such magic before.”

Rappard said “We are so very fortunate to have about a dozen very dedicated committee members, all of whom have made it a priority to make our newcomers feel welcome. The neighbours in the apartment are very supportive, as is the staff at the school.”

She continued “It seems like everyone wants to help! So, this concert presents a perfect opportunity to enjoy the sounds of the season, but also to support this young family as they embark on this amazing new adventure. We are so excited that they will be welcoming a little (Canadian!) baby in March.”

Tickets are $20 for adults, $10 for under 12, and are available at The Thrift Shop, Meat the Butcher and M&M Food Market.