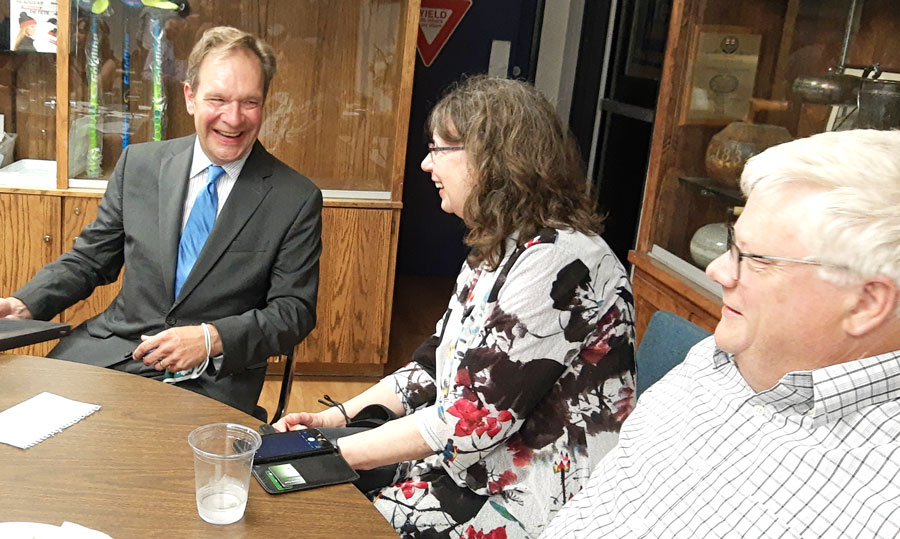 Wellington-Halton Hills incumbent Ted Arnott is heading back to Queen's Park after a resounding victory on June 2. Here he chats with family at his victory party. Photo by Joanne Shuttleworth

WELLINGTON-HALTON HILLS – Almost as soon as the polls closed, Wellington-Halton Hills incumbent Ted Arnott was in front of the pack and he never relinquished his position.

The long-standing Progressive Conservative candidate easily won the June 2 provincial election in this riding with 25,049 votes, or 50.6 per cent, according to Elections Ontario’s unofficial results.

At his celebration party at the Fergus Curling Club, Arnott said he never takes election outcomes for granted, even though he’s represented the area as MPP since 1990.

“It’s never a cakewalk,” Arnott said before the results started rolling in.

“We know we have enormous challenges ahead of us. We will meet the challenge,” he added after the results were known.

About 50 people gathered at the curling club to watch the results and there were cheers when Arnott was declared the winner.

Arnott thanked his family, his campaign team and his supporters for sending him to Queen’s Park for four more years.

Arnott said after two years of pandemic restrictions, it was “fun” to be on the campaign trail, meeting people at their doorsteps and hearing first-hand the struggles they are up against.

He heard from farmers, seniors, business people, families and acknowledged that Ontarians are still having a rough time, even though the pandemic is now mostly behind us.

“We must resolve to do better,” he said. “I hope and pray I can fulfill my role.”

The closest race in Wellington-Halton Hills was for second place. And even though NDP candidate Diane Ballantyne won that battle, it wasn’t the fight she wanted to win.

In fact, Ballantyne was a little baffled that she didn’t do better.

“This campaign was extraordinary,” she said in an interview at the Outpost Bottle Shop in Fergus, where she and her supporters watched results roll in.

“I had more volunteers, more signs, more money raised and more friends were made. And because of the money we were able to be everywhere – radio, TV, newspapers, social media.

“We did everything we could do and I really want to thank my team.”

Ballantyne said she thought people would remember the pandemic and the harm PC policies and decisions have caused.

“We presented a platform that would show a different way government could look. But the people have spoken,” she said.

Ballantyne, currently a Wellington County councillor, said while she would have been happy to head to Queen’s Park, she will run again in the fall municipal election.

Green Party candidate Ryan Kahro said she feels good about the strides her party made in the campaign, adding her personal results were a good place to start for her first time running.

“We learned a lot, we accomplished a lot,” Kahro said. “We connected with a lot with the community.

“A lot of green groups came forward to use their voices.”

Kahro said overall it was a great experience for her and she’s looking forward to representing the Green Party in the next election.

“It was exciting to see kind of the rumblings of change and opportunity for viewing things differently in the future,” she said.

“Of course, congratulations to Ted and everyone else that ran.

“It’s not an easy thing to do and my hat’s off to everybody who is willing to step up and be a representative for the community.”

In the meantime, Kahro said she will be continuing to advocate for water protection, the environment and supporting the community’s voice.

Liberal candidate Tom Takacs said while he was content with the outcome, he would have liked to have had the opportunity to get on board a few months prior to the election.

“I think my ability to focus on the riding would be more intense,” he said, adding “when you’re dealing with the Speaker of the House, the incumbent has been there 32 years …  it’s a hard thing to overcome.

“We were all quite pleased,” Takacs added of the outcome.

“Sure, we would have wanted more votes and a closer fight, but it’s up to the people to vote and it’s their decision on what direction they want to take.”

Coming out of the pandemic, Takacs said the next four years won’t be an easy feat for any party.

He added he is considering running again in the future, but it will be dependent on a few factors.

“It’s definitely a learning curve,” he said. “I think I’m getting better at every election that I take on, so who knows?”

The NDP took 31 seats and while leader Andrea Horwath was elected in her riding, she has resigned as leader of the party.

The Liberals won eight seats but leader Steven Del Duca’s riding was not one of them. He announced his resignation as leader as well.

Green Party Leader Mike Schreiner won handily in Guelph but he remains the only elected Green Party member in the province.