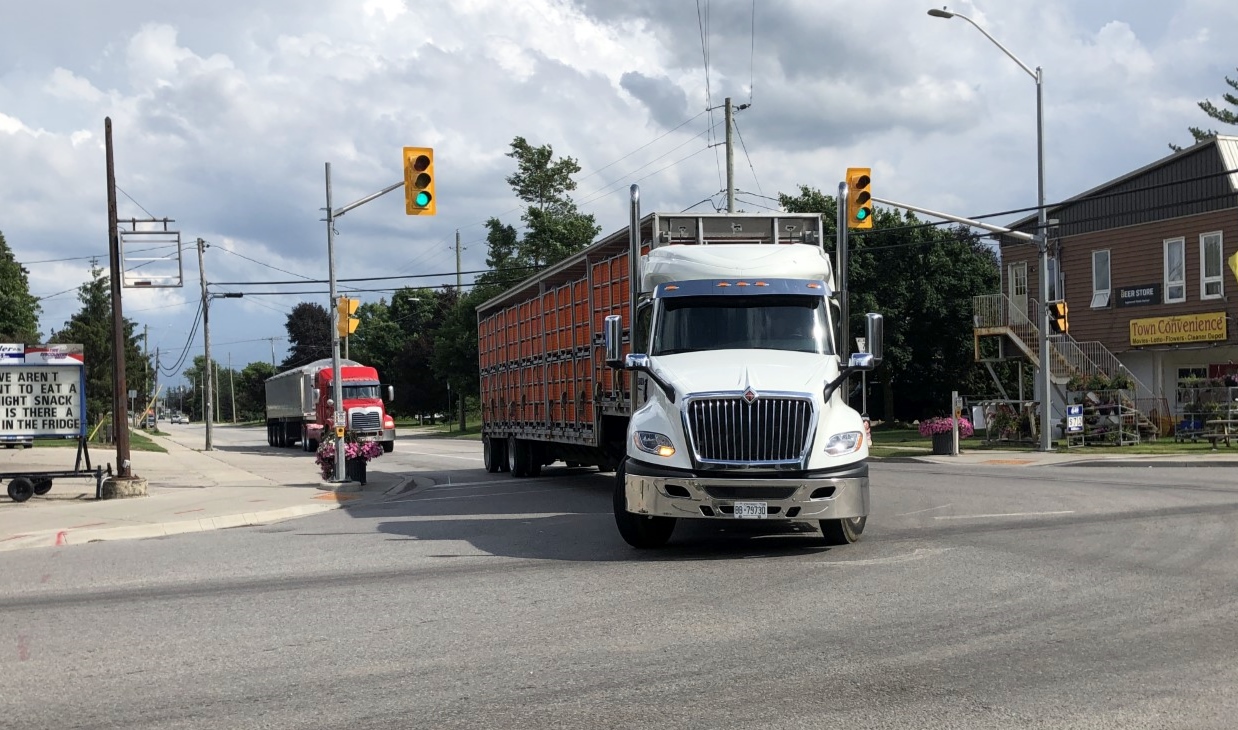 Concerns over heavy traffic on Wellington Road 17 have residents of the village of Alma lobbying for a crosswalk in the community. Advertiser file photo

Council gave the direction after hearing from a delegation of Alma residents at the Oct. 12 meeting, which was held at the Alma Community Centre.

Peel Street resident Tracey Geddes noted there is considerable discussion regarding traffic volumes in the community due to the recent creation of an alternative truck route directing Highway 6 traffic around Fergus and down Wellington Roads 7 and 17, which both pass through Alma.

“It is no argument that the traffic is increased,” said Geddes. “We feel that it is time to proactively address this situation.”

She added, “I would like to start the conversation of how residents can safely cross this increasingly-busy road, especially the numerous students who are walking to Alma Public School.”

Currently, Geddes pointed out, the only “designated” way for students to cross the road is at the traffic lights at the village’s main intersection (Wellington Roads 7 and 17).

“The intersection is overwhelming to navigate as it is the main junction for traffic flow in and out of the community. The other option is to navigate traffic at one of the side streets, with poor sight lines when traffic is heavy,” she explained.

“As a parent, this is a cause of concern. Students are crossing county road 17 at some of its busiest times in terms of traffic. I feel that a solution should have been in process already, even more so now,” Geddes stated in a letter to council.

Asked if a crosswalk would be used by students if they had to walk out of their way to reach it, Geddes said, “I know myself that if there is a lit crosswalk that’s where my child is crossing. We teach them use the resources that are there.”

“The concern at the time, and it’s no different now, is if you put a crossing guard or a crosswalk there to dump kids on a street with no sidewalks it becomes problematic too,” he added.

Councillor Marlene Ottens asked if the township even has the authority, “or even a say” in the installation of a crosswalk on a county road.

“Typically, we do have a say,” stated Mapleton public works director Sam Mattina.

Mayor Gregg Davidson pointed out there are currently a number of county councillors lobbying for the county to fund the installation of crosswalks as well.

“At the present time we have to get permission from the county, we install them and they take them over and maintain them. To me, it’s a little ridiculous to have two levels of government involved in the same project,” the mayor stated.

Davidson also noted that before a crosswalk can be considered it must be determined if the location meets Transportation Association of Canada (TAC) guidelines, including a minimum distance from the closest traffic light and minimum traffic and pedestrian volumes.

“We’d all love to just put a crosswalk in, but we have to follow the guidelines,” said Davidson. “We can discuss it as council at some other point in time.”

Davidson added the process to have a crosswalk installed can take some time.

“When we got the one in Drayton it took three years to get it,” he said.

A motion to receive the delegation’s presentation as information was put forward for council’s approval, but Ottens asked if it could be amended to direct “that we take some steps.”

The motion was amended to include direction to staff to look into the proposed location’s suitability for a crosswalk under TAC guidelines.

The amended motion was approved by council.